You’re here because you want to know how to straight pipe a truck.

Let’s find out how to straight pipe a truck and the possible ways to do so.

How to Straight Pipe a Truck: The Essentials

Straight piping a truck or car means eliminating the exhaust’s performance limits so that the engine’s gasses can flow better.

This is often done by removing only the muffler or the muffler and converter together and replacing them with a straight pipe.

Straight piping increases engine performance as more airflow can flow through. This also causes the truck to be much louder since there is no muffler to reduce it.

You can straight-pipe your truck’s exhaust with and without welding. Let’s take a look at both in the following section.

Two Ways How to Straight Pipe a Truck

No matter which method you choose, these are the preferred tools that you should have to successfully straight pipe your truck:

Straight piping a truck without welding

If you decide to straight pipe your truck without welding, then these are the materials that you will need:

We recommend using a pre-formed kit when straight piping without welding because using a universal kit often requires a welder. 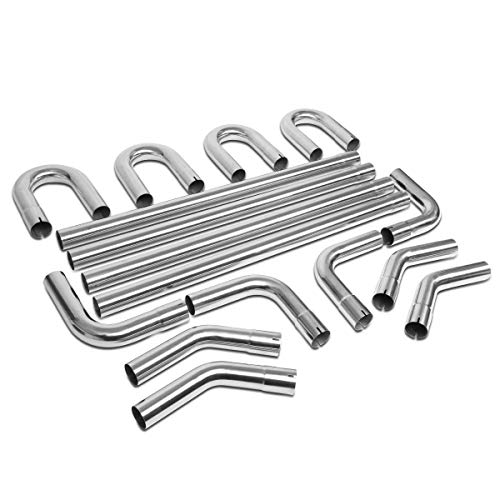 Buy Now
We earn a commission if you make a purchase, at no additional cost to you.

Here’s how to straight pipe a truck without welding

Straight piping a truck with welding

You can easily straight pipe your truck with a welding machine if you have one. If you choose this method, we recommend using a universal straight pipe kit, which you can adapt to your specific truck in any way you need.

Here’s how to do it with welding

Why Would You Straight Pipe a Truck?

Straight piping a truck is beneficial, but it also has its downsides. Let’s take a look and analyze both of them.

How Much Does It Cost to Straight Pipe a Truck?

The cost of straight piping your truck may vary, and it mainly depends on the type of kit you will use and whether or not you will install it yourself or have a professional do it for you.

If you choose a professional to install the kit, you should expect a labor cost of around $50-$200 per hour, depending on their skill and expertise. On the other hand, doing it yourself costs nothing, but you have to do the job right.

As for the type of straight pipe kit, universal kits are cheaper than pre-formed ones, and you can usually find a universal kit for around $200.

Buy Now
We earn a commission if you make a purchase, at no additional cost to you.

Pre-formed kits are more expensive but usually involve easier installation and are of higher quality. You can find a good quality pre-formed kit for around $1,000, but some prices stretch up to $2,500 and more.

Frequently Asked Questions About How to Straight Pipe a Truck

Can I run straight pipes on my truck?

How much is it to straight pipe a truck?

What does straight piping do to a truck?

Straight piping a truck makes the engine work more efficiently and makes the truck louder, since the muffler and catalytic converter no longer exists.

Yes, straight piping a truck adds horsepower in most cases.

How long does a straight pipe last?

A straight pipe lasts the same amount of time as any other exhaust system you’d have on your truck, assuming you use equal-quality parts.

In many places, straight pipe is not street legal.

How long does it take to straight pipe a truck?

It usually takes between 30 minutes and 120 minutes to straight pipe a truck, depending on the vehicle, parts you’re using, and your experience straight piping a truck. If you’ve done many before, it won’t take you as long as someone who is doing it for the first time.

Can I replace my catalytic converter with a straight pipe?

Legally, you’re probably not supposed to — straight pipes are illegal in many places. Technically, yes, it is possible to replace your catalytic converter with a straight pipe.

Yes, a straight pipe will remove the vehicle’s catalytic converter.

How much hp do u lose from straight pipe?

You shouldn’t lose any HP when you straight pipe a truck. In fact, you’ll likely gain HP.

Yes, straight piping will make your truck louder because it is removing the muffler and catalytic converter(s).

Hi everyone, my name is Frank Diaz and I am the face behind GaragestPicks. I studied Mechanical Engineering at Georgia Institute of Technology and worked as a mechanic for over 20 years. I love working on cars and doing DIY projects around the house. I write this blog to share my knowledge and help others fix their cars with most common tools.

Hi everyone, my name is Frank Diaz, and I am the face behind GaragestPicks (“GP”). I studied Mechanical Engineering at Georgia Institute of Technology and worked as a mechanic for over 20 years. I love working on cars and doing DIY projects around the house. I write this blog to share my knowledge and help others fix their cars or work on their projects.

What do we cover at Garagest Picks? We write about everything that goes on in a garage or has to do with a garage. That includes cars, trucks, dirt bikes, ATVs, SxS, as well as tools, jump starters, and DIY garage projects.

This website is a participant in the Amazon Services LLC Associates Program, an affiliate advertising program designed to provide a means for sites to earn advertising fees by advertising and linking to Amazon.com.